コンテンツへスキップ
We three came to Japan to assist in the launch of the Association to Consider Organ Transplantation in China, also called Stop Medical Genocide Network.  The Association was launched at the House of Councillors of Japan on January 23rd.・・・・ 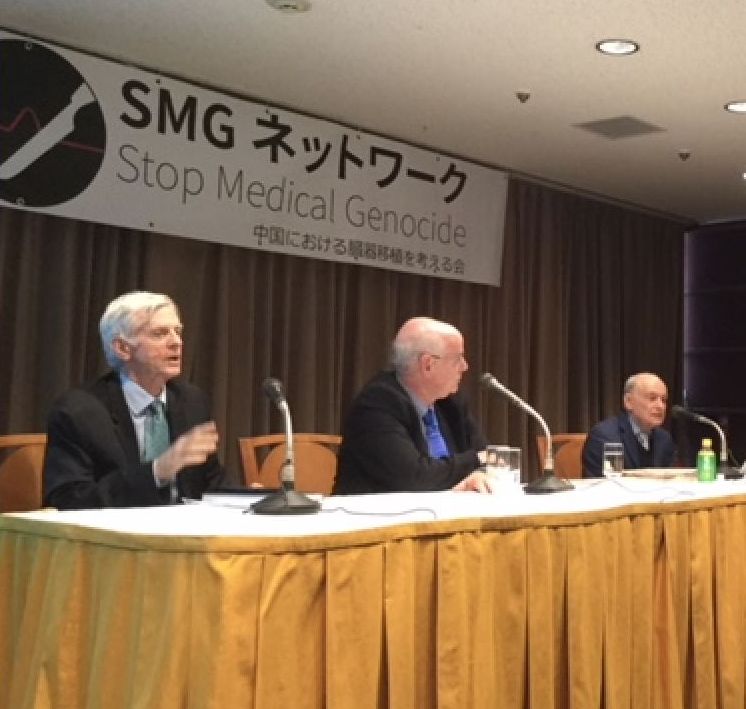 From the left:David Kilgour, Jay Lavee, David Matas
on 24th January 2018
at the Foreign Correspondents’ Club of Japan

We three came to Japan to assist in the launch of the Association to Consider Organ Transplantation in China, also called Stop Medical Genocide Network.  The Association was launched at the House of Councillors of Japan on January 23rd.

As the formal and informal names of the new Association suggest, there is a now a medical genocide occurring in China through transplantation.  Innocents are being killed in large numbers for their organs – primarily practitioners of the spiritually based set of exercises Falun Gong, but also Tibetans, Uighurs and house Christians.

Only the Chinese can stop human rights violations in China. But Japan has entirely within its powers actions to avoid complicity in Chinese abuses. There is much Japan can do.

Japan has a strong law prohibiting transplant abuse in Japan. But the law does not have extra-territorial effect.  A person who kills in innocent in Japan for their organs will be prosecuted.  A broker who arranges for a patient to benefit from an organ sourced in China from an innocent killed for that organ will not be prosecuted either in China or in Japan.  The law needs modification to allow for that sort of prosecution.

To help in the implementation of such a law, there should be compulsory reporting by health professionals to the health system of transplant tourism. Right now we have only anecdotal and survey information about transplant tourism from Japan into China, but no authoritative figures.

Second, it is possible now to buy in Japan an advanced medical insurance which could provide coverage for transplantation in China.  The Government also announced in December last year that for transplant abroad it will reimburse surgical fees and hospitalization expenses equivalent to the cost of transplant surgery in Japan.  Laws and policies need to prevent financial incentives to transplant tourism into China.

Third, Japan should prevent collaboration with Chinese transplant professionals – the joint research, the exchanges, the visiting lectures, the publications, the funding and so on – until China cleans up its transplantation act.  This can be done both by professional ethical standards and again by law, including immigration laws.

The Communist Party of China/Government of China admits to no wrong, but also covers up, distorts, destroys evidence and represses criticism.  Until Japan can be satisfied beyond doubt that transplantation in China is above board, Japan should have nothing to do with the China transplantation industry.

Fourth, Japan needs to do considerably more to increase its low organ donation rate. The Israeli Organ Transplant law which gave priority to patients who had committed to organ donation at least three years prior to their need for organs more than doubled the donation rate in Israel.  Japan should consider a similar law.

On the other side, there are measures we do not recommend. We do not recommend the prosecution of transplant tourism patients. The targets of the law should be the brokers, the advertisers, the facilitators, and those engaged in referrals.

Second, we object to denial of after care to those who have had transplants abroad, even in the worst circumstances. Anyone who needs medical care should get it.

Third, laws and policies to prevent complicity in Chinese organ transplant abuse need not mention China and indeed should not.  The gaps we identify here are gaps in general standards. Though the problem is China, the solution should be general.

The new association has a website, www.smgnet.org, and a campaign. We invite everyone go to the website both to learn more and to join the campaign.

Japan is a world leader in many domains, including transplant technology. But when it comes to combating complicity in Chinese organ transplant abuse, Japan lags far behind. That should change.

David Matas, an international human rights lawyer based in Winnipeg, Canada and David Kilgour, a former Canadian Parliamentarian Government Minister in the Government of Canada based in Ottawa, are co-authors of reports, a book and, with American journalist Ethan Gutmann, an update on the killing of prisoners of conscience for their organs in China. Jay Lavee is an Israeli heart transplant surgeon based in Tel Aviv who was instrumental in changing Israeli law to clamp down on transplant tourism from Israel to China.